A Group Exhibition of Recent Works By 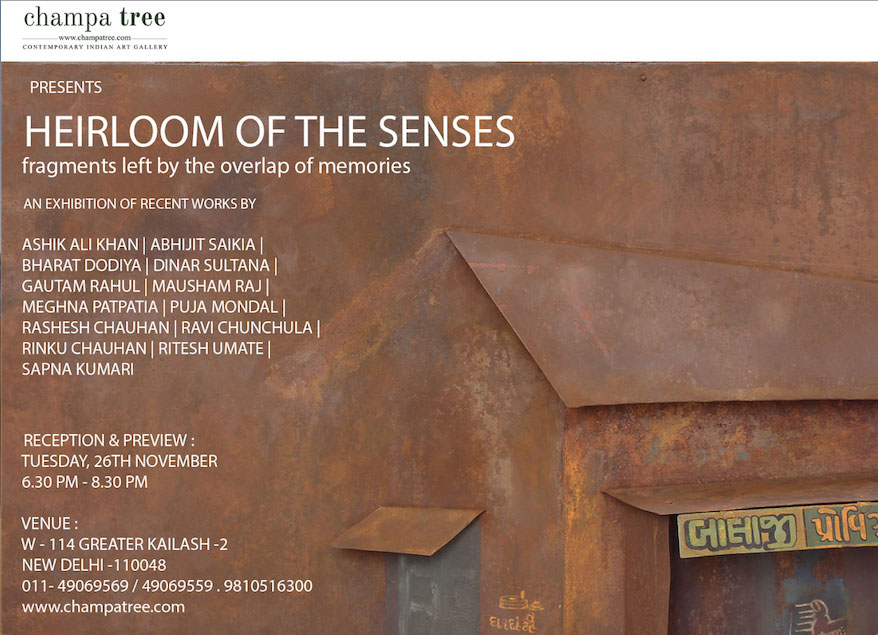 HEIRLOOM OF THE SENSES

Fragments Left by The Overlap of Memories

A Group Exhibition of Recent Works By

In Support of Arts4All

Memories fade leaving behind fragments as the only source of recollection to the past. Forming layers with time as they camouflage, exposing only what is left as the intangible. This fading of memories expresses similarities to the phrase “To be or Not to be” from William Shakespeare’s ‘Hamlet’ as a reflection upon the concept of “Reveal and Conceal”. Here, the phrase illustrates the battle within our subconscious that constantly struggles with the choice of “what memories to keep and what to fade”. The phrase is predicted as a puzzle which is constantly curious of the five senses of the body: Smell, Sight, Hear, Touch & Taste, as an intangible treasure that remains infinite and is subjective to oneself. 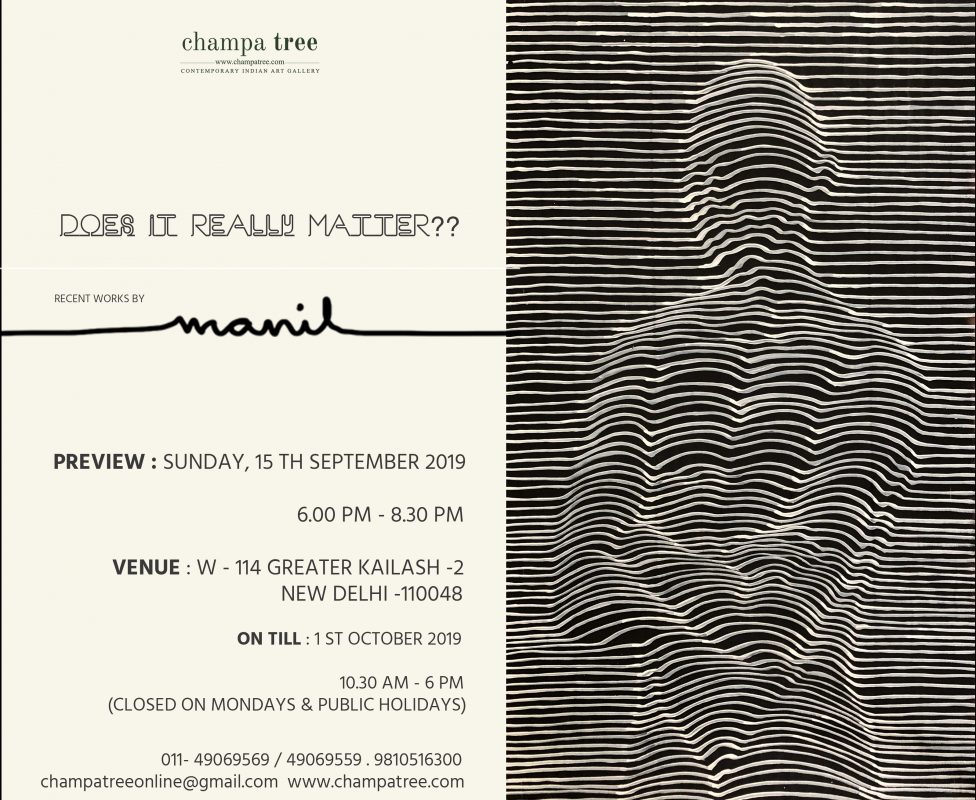 DOES IT REALLY MATTER??

In Support of  Arts4All

Manil’s work is an expression of self, away from the societal deluge that we have created. His work is guided by free expression, away from a predetermined ornamental style, that transforms blank canvases into an experiment. The artist is only in control of the colour, washes and scratches on the surface. The outcome is purely incidental.

The stress on spontaneity and ‘beautiful deviations’ are crucial in his artscape. He is not preoccupied with perfection and the constant need for things to looks acceptable and aesthetic. Each canvas is an adventure- swift and buoyant. The adventure starts with the artist removed from the outcome, the lines gradually arises to form a story in shape of forms we are aquatinted with and it ends with the story progressively submerged into the lines it was shaped from. Lines flow without breaking the surface and create works that play around the visual parameters of both abstract and figurative. Manil’s artwork moves away from the usual clutches of conditioning and clichéd thought patterns. It is liberating to see self-expression in an expanse that is free from diktats, politics and society. 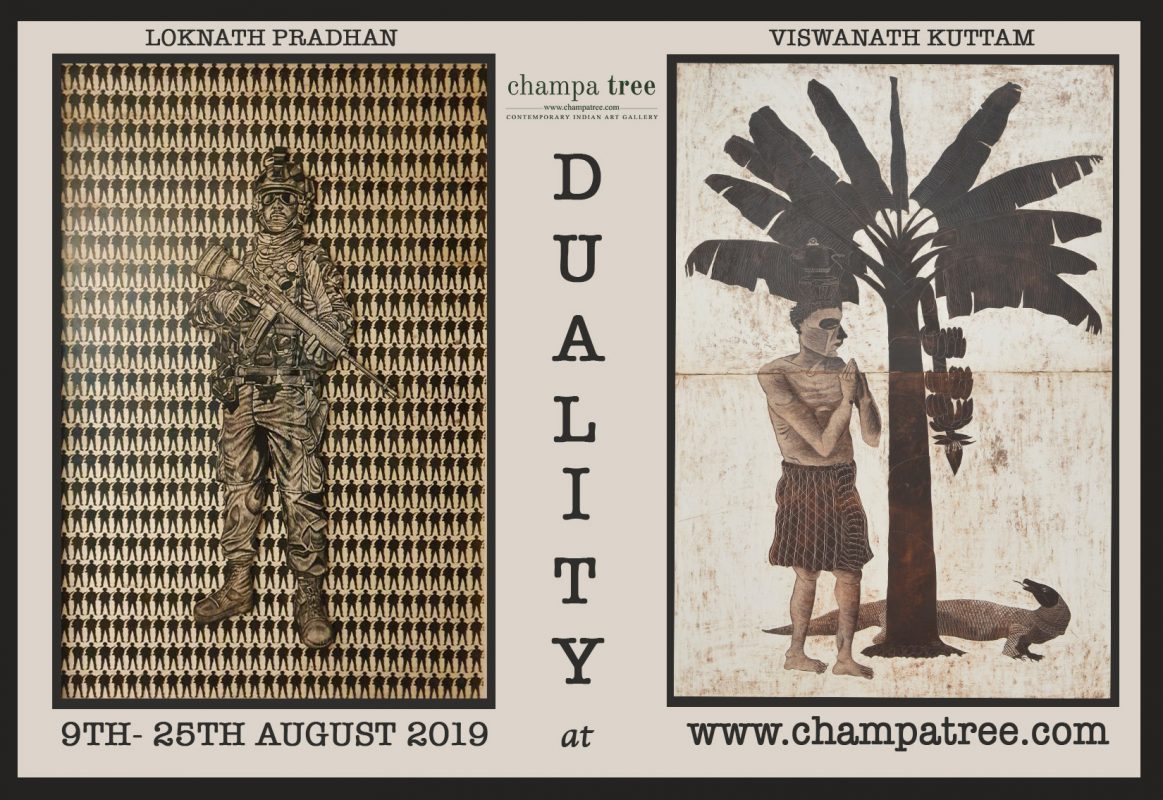 In Support of  Arts4All

Duality is a group exhibition by two artists who explore two varied natural landscapes that exist simultaneously. One explores the topic of changing environment in our cities, the other takes inspiration from his decade long practice of combing art with natural environment he is most familiar with. Loknath Pradhan’s artscape touches upon the sensitive yet crucial topic that our current society is entangled with- pollution. Human insolence is not shown how it normally in popular visual culture. Refreshingly, nature is fighting back and finding a way to thrive in his artscape. Viswanath Kuttum’s body of work takes us away from city life to the quaint, pristine islands of Andaman and Nicobar. Taking inspiration social, cultural and environmental cues around him, he creates a sense of social coexistence and amity in villages through his work.

The contrast in their work is apparent by their use of colors and imageries. Loknath’s work looks bright and intriguing, hiding the problems behind the mask of consumerism, politics and growing conflict in society. Viswanath’s work is monochromatic and static which takes the viewer away from the cacophony of city life to simpler times. 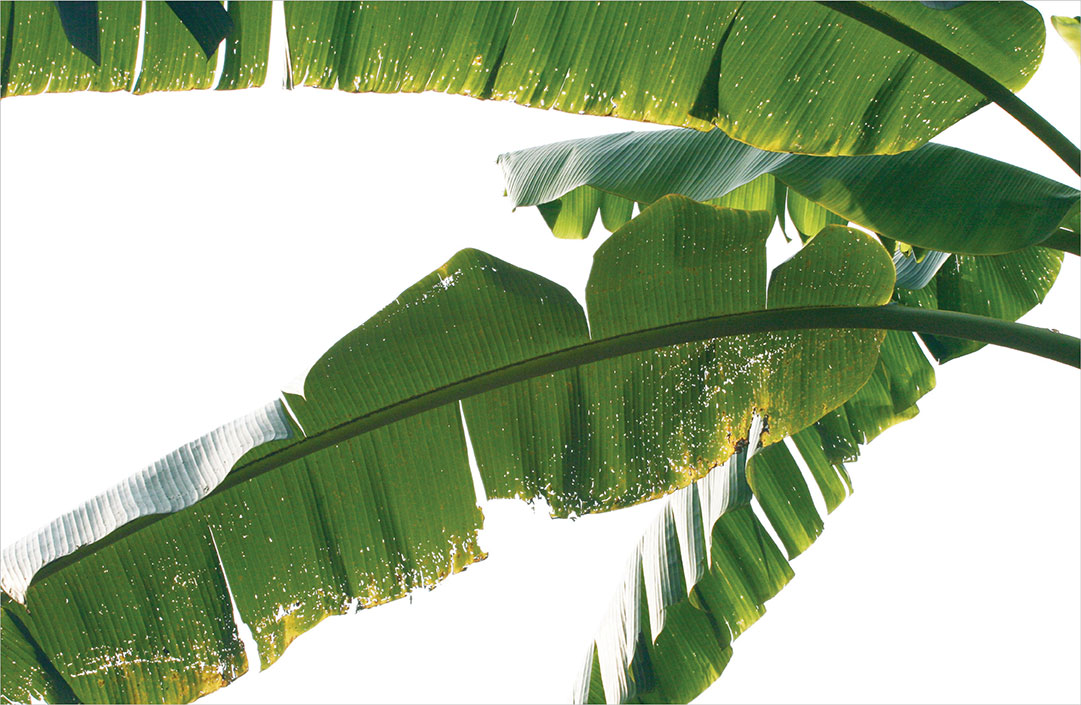 Kerala, Gods own country, a state in Southern India is known as tropical paradise of waving palms and wide sandy beaches. It is a narrow strip of coastal territory that slopes down the Western Ghats in a cascade of lush green vegetation, and reaches to the Arabian sea. It is also known for its backwaters, mountains, coconuts, spices and art forms like Kathakali, Mohini Attam and Kalaripayattu. It is the most literate state in India, and a land of diverse religions and culture, where you can find Hindu temples, mosques, churches, and even synagogues.

During the beginning of August, severe floods affected the state of Kerala, due to unusually heavy rainfall during the monsoon season. It was the worst flooding in Kerala in nearly a century. Millions of people were evacuated from various parts of Kerala. Around 14 districts of the state were placed on red alert. The flooding has affected hundreds of villages, destroyed an estimated 10,000 km of roads and thousands of homes have been damaged or destroyed.

KekkeyellamFoundation would like to step in the relief work by providing necessary fund by raising an Exhibition namely “GREEN LINE” which would include the art works of 108 contemporary artists across India. The show is being organized at Arts4All, Greater Kailash II, New Delhi from 5th to 14th April 2019. 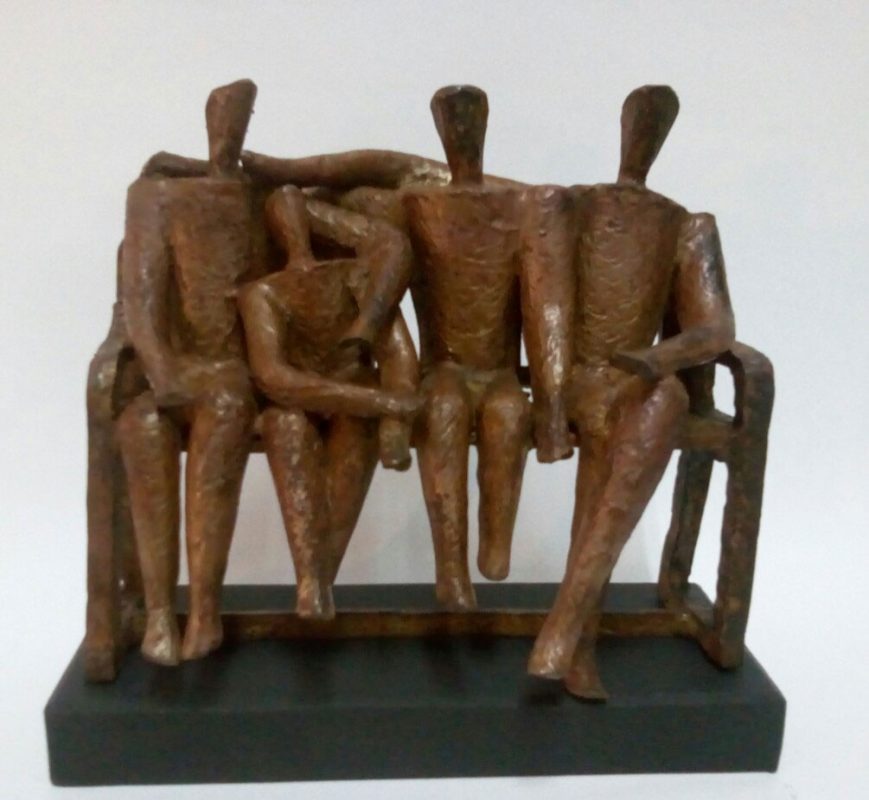 Arts4All is hosting a group show by the Calcutta Sculptors at their Art Centre, A4A Baithak. The show is a culmination of works by nine sculptors who have captured the everyday essence of human life. ‘Sculptures for Everyone’ is a carefully assorted exhibition of hundred artworks. Their life’s journey and everyday happenings is the muse for the works yet to be displayed. They draw inspiration from the mundane to the special; moments of significance have been documented through the medium of bronze. Irrespective of one’s background, the theme of the show invokes a sense of community and shared experience. These include a variety of emotions and experiences that may be subjective at first but are shared by all. The universal nature of the artscape is what makes it engaging and open to reflect on one’s own feelings and perspectives.

Calcutta Sculptors was established in 1993. It is the only independent organization of sculptors in India. In keeping with their yearly tradition, this year they will be felicitating Ms. Sushma Bahl, well know arts consultant and curator, for her contribution in the field of art. They support emerging sculptors by organizing art camps and scholarships for students all over the country. They also organize regular exhibitions and seminars for artists, scholars and curators to engage discussion and debate in the field of art. 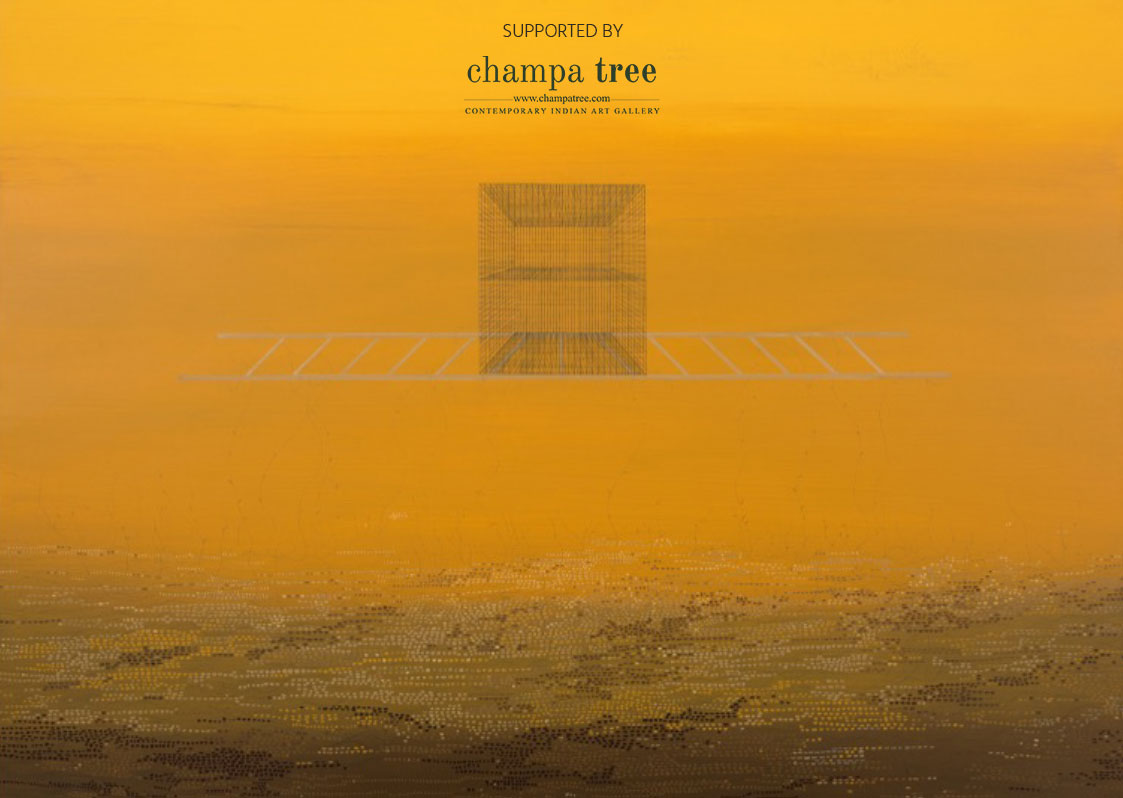 “For me, the process of creating art is sometimes the complete absence or extreme presence of pain. Lines and space play a prominent part in my works with the subtle lines creating an abstract form which is floating yet stuck with the background. My lines define different energies and different state of being. It is an Artist’s medium of communication and expression. The energy in the lines that I create is constantly moving, travelling from one place to another. They look like small marks or curves, but with deep underlying emotions within them. Each and everything is connected universally. This repeating form in my works is a meditative process- it is my own personal journey with momentary feelings of happiness, memories of pain & love.”